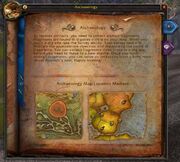 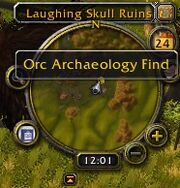 Minimap showing an archaeology 'node' after being uncovered

Archaeologists search the world - and places beyond - for mysterious remnants of the past. Their digs unearth all manner of artifacts, and a persistent archaeologist will research commonplace historical items alongside rare and powerful relics.

Artifacts provide invaluable insight into the history of the world, but some collectors are more than willing to assign a monetary value to them. After documenting finds in their journal, archaeologists can sell the items they retrieve to vendors and museum curators for extra money.

Archaeology is a secondary profession - anyone can learn to investigate and assemble the ruins of the past, no matter how many other professions they've devoted themselves to.

All archaeologists begin by surveying maps of Azeroth to find the locations of promising dig sites, and then investigating those sites on foot along with survey tools in an attempt to narrow down the location of the most precious historical fragments in that area. Different locations provide different types of historical artifacts - and different rewards.

Archaeologists who hone their craft over time recover increasingly more valuable and rare items, and their knowledge about the world and past of Azeroth grows alongside their collection of relics.[1]

Upon learning the archaeology secondary profession, the player receives the ability Survey.

There are eleven fields of research players can explore, each relating to a race in the game, such as troll, night elf, dwarf, and tol'vir.

Once Archaeology is trained, you can see dig sites on your continent map and your mini-map. There are always four dig sites per continent. These will not change until you dig all the fragments out of any one site.

Your dig sites appear in level-appropriate zones. Players will not be able to survey in Outland, Northrend or any of the Cataclysm zones until they have reached the minimum level to enter those zones.

Sites are race-specific. You can usually discern the race by the location and name, and some race locations are only available on some continents. You need both a minimum character level and a minimum archaeology level to use some sites.

There is no competition for dig sites; each site is player-specific.

To search a dig site, use the Survey ability. A theodolite will spawn, pointing in the approximate direction of a find; it looks like a telescope with a small flashing light on a pole next to it. The color of the light and the rate at which it flashes tell you how far you are from a find: red means you are far away, yellow means you are close, and green means you may be within 40 yards or so. The precise ranges for the different light colors vary depending on the site, with larges sites having longer ranges. When you loot your find, you'll get several fragments specific to a particular race, and may get a keystone. Each site yields only finds specific to one race. Note that unearthed archaeology finds will despawn if they aren't looted quickly enough, so be careful about surveying in combat. Also remember that if you are having some difficulty seeing your find, it will automatically show up on the minimap, just as herbs and minerals do with Find Herbs and Find Minerals. Although each archaeology site can have six finds unearthed at a time, only one node is active at a time: once the first find is unearthed, the location of the second find is randomly selected, it is possible to unearth two or even six finds in a row at the exact same location. Once the third find is unearthed the dig site despawns and a new site spawns somewhere else on the continent.

There are two main strategies to surveying. The first strategy involves attempting to triangulate by moving around the outer edge of a dig site. However, due to the inaccuracy of the directional indicator (the find may be anywhere in a frontal cone of about 75 degrees) this will often prove to not provide sufficient information for locating finds. The farther away from the theodolite, the greater the area that can include the find. The second strategy involves some orienteering, heading in the general direction indicated and for approximate distance indicated and survey again from that position, to "zero in" on the artifacts, using geographical landmarks to help locate finds.

Being aware of the landscape can help locate finds as well. Consider that the fragments are not "randomly" placed. Spawn points were placed by designers who utilize their "design aesthetics" in placing them. Consider the landscape and proximity to geographic features and existing non-fragment ruins and animal bones when choosing a location to survey. This can speed up your location of fragments.

The fact that each digsite contains only a few nodes could allow gathering addons such as Gatherer or Gather Mate to aid in archeaology. Addons such as Archaeology Helper, S.A.L. and ArcheoTriangle aid in triangulation and orienteering.

As the spawn points are not random, try surveying on the spot after finding your first and second fragment. It is entirely possible for the next one to be within reach, and even to spawn in the exact same spot as the last one.

When you get a new kind of fragment, you'll start a research project. You can only work on one artifact per race at a time. When you have enough fragments, click Solve to complete that artifact. You cannot waste excess fragments: if you have leftover fragments, they will just apply to the next project. You can accordingly save up to 200 fragments of one kind and solve several projects in a row.

Most artifacts are common. These give a bit of lore or flavor text and an item you can sell for a small profit. You can estimate the value of the artifact by the number of fragments required to finish it.

Some artifacts are rare, and make a blue or purple item. Many of these are toys, or for flavor, but some are actual weapons and armor. Weapons and armor are bound to account, but will not scale like heirlooms do. Also, such artifacts can only be solved once per character.

Archaeology uses the same leveling scheme as the other secondary professions. Players begin as apprentices with zero skill points, and gain points by practicing archaeology skills. Players may reach 525 skill points in archaeology.

At all levels, players receive one skill point for every successful collection of archaeology fragments, five skill points for creating a common artifact, and 15 skill points for completing a rare artifact. Previous to Patch 4.3, higher level archaeologists would get more fragements from each successful survey. However, in an undocumented change, the number of fragments per survey was increased to its current level of five to nine. As one may dig up to six times at a site, this yields potentially up to 27 fragments per site.

At all skill levels, the archaeologist may also discover a keystone. Each worth 12 fragments when combined with selected artifact construction, or can be saved up for a daily quest available in Level 85 instances. The archaeology rewards page give fuller details.

Most artifacts are Poor-quality items, worth between 1

Archaeology levels limit what kind of artifacts players can make. Players begin by collecting fragments for dwarf, night elf, and troll artifacts, as well as natural fossils, such as shells and fossilized ferns. At higher levels, players can research artifacts from different cultures, which will take them deeper into the lore. The higher-level archaeology racial project pages (e.g. orc or tol'vir) are not available to players until they have reached the appropriate level and have collected some fragments for a given type, though players can always see the greyed-out, untitled, and unclickable icons of not-yet-accessible cultures on the "Races" page of the archaeology journal. As soon as players hit the appropriate point level and make one successful dig at a new kind of site, that section of the journal is fully opened (i.e. a player can first see the draenei section of the archaeology journal upon hitting 300 archaeology and collect the first draenei archaeology fragments).

Archaeology dig sites can be found on all four continents. There are four dig sites on each continent available at any one time. Dig sites are available based on player skill. However, compared to other gathering professions, there is no competition between players. Upon reaching a dig site, players will be able to collect their six finds before the dig site dries up and a new one is made available. Even if other players are searching at the site, the finds are individual to each player.

Archaeology was originally intended to allow advancement in Path of the Titans (feature) system and may have awarded players with Ancient Glyph slots and recipes. At present, rewards include various non-combat items, mounts and epic quality Bind to Account gear. Players are able to piece together skeletal fragments to create a skeletal raptor mount, for example. Players can also read ancient runes found in ruins and dungeons to give buffs to themselves and others.[2]

All 32 of the rare artifacts are listed here:

There are also achievements awarded as a result of leveling archaeology and finding rare finds: Professions achievements/Archaeology

This simple macro puts both new skills on one button for your toolbar. Click to survey or hold a modifier key like shift and click to open your Archaeology skill book.

This macro shows how many finds players have come across. Open up the archaeology window and look at the results list before this macro will do anything useful.

This macro allows druids to shift out of flight form and into travel form to survey a digsite when clicked, and switch back into swift flight form when right clicked. Simply remove the word "swift" from the macro if you do not have swift flight form.

Below are websites associated with Archaeology.

WoWdigs.com A comprehensive WoW Archaeology website with pics, guides & maps to all digsites.