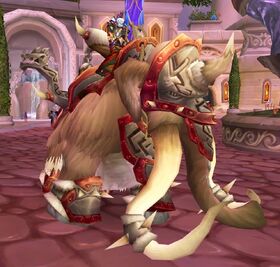 Mounts were generally expensive in the past, but their prices have been reduced while the training to ride them increased in order to compensate. However, some mounts do not cost any gold or other currencies (such as honor points) and will drop at very low rates from bosses in instances such as Stratholme, Tempest Keep, Magisters' Terrace, Sethekk Halls, Karazhan, and Utgarde Pinnacle. There are numerous other methods to obtain mounts as well, such as class quests, completing achievements, the Trading Card Game, and the Black Market Auction House for older ones from removed content.

Mounts have a 1.5 second cast time, which will be interrupted by taking any damage, moving, or entering combat. 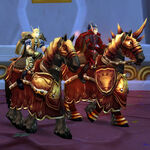 Since patch 4.0.1 most mounts no longer have intrinsic values for speed; their speed is dependent only on the player's riding skill.

Mounts can swim (but not any faster than swimming without the mount). There are aquatic mounts which move at +60% swim speed anywhere and amphibious ones which can walk on land, and another that can only be used underwater in Vashj'ir but moves at +450% swim speed. Vanity mounts confer no benefits (and thus, require no riding skill or character level).

Once a character reaches level 20, they will automatically receive a quest directing them to visit their racial riding trainer and mount vendor. Apprentice riding skill (75) costs 4

for training and an additional 1

for each mount, both reduced by the appropriate reputation discounts. Increases mounted movement speed by 60%.

from their class trainers, which grants them apprentice riding skill. Additionally, worgen learn Running Wild at level 20, which functions as their automatic racial mount.

for training and an additional 10

for each mount, both reduced by the appropriate reputation discounts. Increases mounted movement speed by 100%.

At level 40, paladins and warlocks can learn Summon Charger/Summon Great Exarch's Elekk/Summon Great Sunwalker Kodo and Dreadsteed from their class trainers after learning the Journeyman riding skill from the riding trainer. There is no need to purchase a new mount. Death knights receive their epic ground mount, the Acherus Deathcharger (ability), after the completion of the quests Grand Theft Palomino and Into the Realm of Shadows at level 55.

Once a character reaches level 60, they will automatically receive the quest I Believe You Can Fly, this time directing them to visit their factions' most accessible riding trainer and mount vendor. Expert riding skill (225) costs 250

for training and an additional 50

for each mount, both reduced by the appropriate reputation discounts. Increases mounted movement speed by 150% in the air and 100% on the ground.

, which grants them expert riding skill for next to nothing.

and unlocked the ability for players to fly in the Eastern Kingdoms and Kalimdor excluding the zones that requires The Burning Crusade expansion (like Eversong Woods and Ghostlands), much like Cold Weather Flying can at 68 for flight in Northrend. It required level 60 and Expert riding skill. It also required purchasers to have World of Warcraft: Cataclysm attached to their account.

This ability was not required for Cold Weather Flying or any higher skill tier.

, reduced by the appropriate reputation discount. This granted players the ability to also use their flying mounts in Northrend and required level 68 and expert riding skill. One could also wait until level 80, at which it would be automatically learned for free.

. In Patch 3.2.0, a bind to account heirloom, the Tome of Cold Weather Flight, was made available for level 80 characters to purchase for 1,000

, which allowed characters of level 68 to learn the spell making flight in Northrend possible from an even earlier level. Patch 4.0.1 made the tome redundant, so it was removed.

This ability was not required for any higher skill tier or flying on Outland.

, reduced by the appropriate reputation discounts. Increases mounted movement speed by 100% on the ground and 280% in the air. No class-granted abilities award artisan flying, although the druid ability Swift Flight Form requires it.

for training, reduced by the appropriate reputation discount. Introduced with Patch 4.0.1, it increases the air speed of flying mounts to +310%. However, any characters that already had a 310% speed flying mount pre-4.0.1 were given this skill automatically and free of charge with 4.0.1. Formerly, earning the Reins of the Violet Proto-Drake before Patch 5.0.4 through What A Long, Strange Trip It's Been awarded Master riding for free.

Cold Weather Flying was also automatically learned at this level for free, if it was not yet purchased.

The Wisdom of the Four Winds skill used to cost 2,500

, reduced by reputation discount with the Golden Lotus, and could be learned from their trainers in the Vale of Eternal Blossoms at the Shrine of Two Moons or Shrine of Seven Stars.

In Patch 6.0.2, the bind to account heirloom Grimoire of the Four Winds was added to the Black Market Auction House. It could be listed by San Redscale for the opening bid of 1,000

Cloud Serpent Riding was rewarded for completing Riding the Skies after reaching exalted standing with the Order of the Cloud Serpent reputation faction at the Arboretum in Jade Forest. It was needed to use cloud serpent mounts, along with requiring Level 90 and at least 300 (Artisan) riding skill. Once removed, cloud serpents became just like any other flying mount.

For most of Warlords of Draenor, Blizzard had not planned on implementing flight on Draenor, nor any expansion in the future[1] despite an early forum post mentioning implementing flying in the first content patch.[2] This sparked outrage on the World of Warcraft forums, causing players to create numerous threads[3][4][5][6][7] as each would reach their post limit, with many posters threatening to unsubscribe due to the decision. Blizzard later reversed course and added the Draenor Pathfinder achievement. The idea, and compromise on Blizzard's part, is that players will have to experience the game content on the ground the way it was designed at least once, after which all their characters will be free to fly to the content they want to do again if they so wish.

To earn the achievement, players must experience most open-world content, by exploring the zones, completing the zone storylines, completing all of the Apexis dailies, finding a large number of treasures, and reaching revered with the three factions of Tanaan Jungle.

Taking a cue from how to earn flight in Draenor, a similar set of achievements is required to be completed to unlock flight in Legion areas on the Broken Isles. The first achievement, Broken Isles Pathfinder, Part One, comprises the bulk of the effort to unlock flight.[8] As in Warlords, players must explore all of the zones, complete the zone storylines, their Class Hall campaign, 100 world quests, and reach revered with the opening six Legion factions.

Pathfinder, however, does not apply to the planet Argus, a new "area" added and featured in patch 7.3, much like how Wisdom of the Four Winds did not apply to the Isle of Thunder, the Isle of Giants, and Timeless Isle in Mists of Pandaria. The timing on the release of Pathfinder Part Two and Argus (a mere five months apart, including the time spent on the ground of the Broken Shore to actually get the achievement) left many players feeling that not long after they had earned flying, the developers had "taken flying away from them again."Modèle:Fact While Blizzard has stated that MoP was not all that different, it was conceded that the rollout of content, in this case, could have been better timed, and that they understood why players felt the way they did.Modèle:Fact

When flying was introduced with patch 2.0, Isle of Quel'Danas did receive flying when it was released in patch 2.4. The same thing applied to Isle of Thunder and Isle of Giants in 5.2 and Timeless Isle in 5.4. These zones are about exploration with a bit of danger, making Argus fit quite nicely into that theme.[9]

Although there is no flying in Argus, an increased mount speed is available via the Explore Argus achievement.

The guild perk Mount Up increases your speed while mounted by 10% except in Arenas and Battlegrounds.

There are five other methods for increasing your mounted speed, with no effects beyond level 70:

The first three of these effects stack with each other, before being applied as a multiplier to your current mounted speed. Players with all three effects will, therefore, gain a 9% increase.

The last two items both increase mounted speed by 10%. However, they do not stack with each other, or the other previously mentioned methods. It should be also noted that the Riding Crop is only usable for two levels (69 and 70), and the Skybreaker Whip only for one level (70).

All speed improvement items work on both normal and flying mounts (with the exception of NPC controlled point-to-point flight).

Characters higher than level 70 will not benefit from these mount speed improvement items and enchants. Blizzard's design goal is to eliminate the trinkets, but they've had technical issues with an implementation of an alternate system.[10]

With careful use of Eagle Eye or Far Sight, it was possible to see why Flying Mounts were not allowed in the old world until the Cataclysm expansion hit.

At BlizzCon 2009 it was revealed that flying mounts would be available in some form to use in Kalimdor and the Eastern Kingdoms with the release Cataclysm. Blizzard had previously stated that it was unlikely that they would allow flying mounts in these continents since doing so would require them to redesign the continents with flying mounts in mind.

The former state of the Eastern Kingdoms and Kalimdor was unsuitable for flying mounts; there were visual glitches like mountains and high buildings whose tops could not be seen, and places where the terrain abruptly changed from one tileset to another, creating a grossly unrealistic appearance in some areas. There were also zones which should be there lore-wise but were empty and unfinished.

Since Cataclysm, players could fly all over Eastern Kingdoms and Kalimdor but are still unable to fly in Azuremyst Isle, Bloodmyst Isle, Ghostlands, Eversong Woods, and the Isle of Quel'Danas. Attempting to fly toward Ghostlands will be encountered with an invisible wall that stretches from the Forbidding Sea to the Northern Lordaeron area above Eastern Plaguelands and northeast of Western Plaguelands.

WarcraftMounts.com Images of all the currently available mounts!