Warriors are melee fighters highly trained in the arts of weaponry. They are strong and quick on the battlefield. Clad in plate armor and wielding mighty weapons, they can deal large amounts of damage and are capable of withstanding large amounts of damage to protect other party members. Warrior abilities are fuelled by rage. Rage is generated through damage being dealt to and by the warrior and is capped at 100. Warriors have many abilities capable of aiding rage generation. Druids in Bear Form are much akin to warriors.

Warriors can wear any type of armor, preferring plate. They are able to use shields and can wield any weapon except wands. The primary warrior attributes are strength and stamina.

Warriors are usually to be found leading the Charge into battle, tearing across the battlefield and using furious shouts and terrifying banners to rally their allies and intimidate their enemies. Whether striking down opponents with mighty two-handed weapons, tearing into packs of enemies in a whirlwind of steel, or standing firm in the face of death itself, warriors excel at battle with a range of powerful attacks and battlefield manoeuvres, masters of both skillful strikes and devastating blows.

The vrykul Heimir of the Black Fist is responsible for the training of the first mortal warriors of Azeroth.[2] 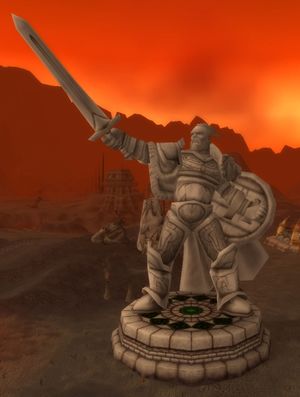 A statue of Anduin Lothar depicting his final charge towards Blackrock Spire. 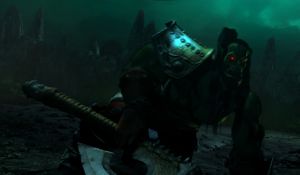 Grommash Hellscream the legendary chieftain of the Warsong clan at the moment before he charged Mannoroth the Destructor which ended in both their deaths. 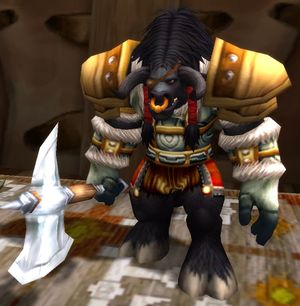 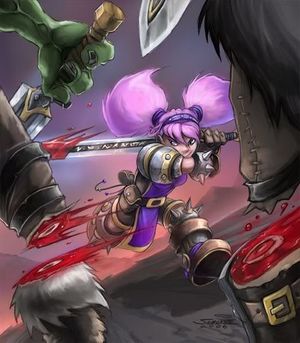 The warrior class can be played by all available races. Modèle:Warrior attributes 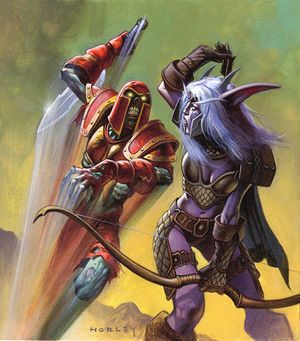 Undead warrior charges to an enemy. 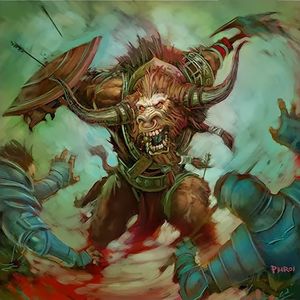 A tauren warrior cleaving his foes. 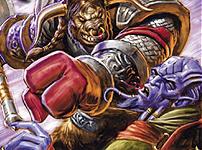 There are three Warrior specializations: Arms, Fury, and Protection. 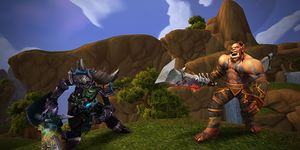 A battle-hardened master of two-handed weapons, using mobility and overpowering attacks to strike <his/her> opponents down.

Arms warriors are seasoned veterans, using might and ponderous weapons to deal colossal blows to their enemies. Preferring power over speed, Arms warriors specialize in powerful burst damage and control, and can become an unstoppable force, tearing opponents down in just a few mighty blows. Smashing opponents with powerful attacks, Arms warriors are capable of dealing immense amounts of damage in a small space of time.

Across culture and kingdom, men and women who demonstrate great physical aptitude are transformed into mighty warriors through tests of strength, endurance, and fighting capability. Their friendships are forged not in the classroom, tavern, or workshop, but in the dueling pits and on the arena floor. As a childhood of sparring defines a warrior’s destiny, so too does one’s choice of weapon determine their role on the battlefield. Arms warriors gravitate toward two-handed weapons instinctively. It’s more than a matter of preference—it speaks to the character of the wielder. Arms warriors are patient in a fight, waiting to capitalize on moments when an opponent is left exposed. Two-handed weapons allow them to deliver devastating, overpowering blows, fully exploiting their enemies’ weaknesses.[3] 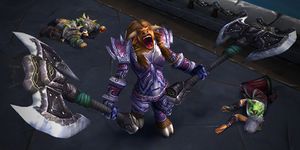 A furious berserker wielding a weapon in each hand, unleashing a flurry of attacks to carve <his/her> opponents to pieces.

Fury warriors are dual-wielding berserkers, dealing a rapid succession of wild attacks with each weapon. While all warriors rely on rage to fuel their attacks, Fury warriors focus their anger in a different way, allowing the heat of battle to send them into a bloodthirsty rage, empowering them and unleashing their most powerful attacks. Fury warriors' mastery Mastery: Unshackled Fury further rewards these crazed berserkers.

On the battlefield and in the arena, the most feared combatants are often the furious berserkers who lust for battle and thirst for blood. Through a lifetime of training and sparring, these merciless warriors have become masters of carnage—often wielding a weapon in each hand to maximize the destruction. Even without the protection of a shield, the fury warrior leaves little opportunity for an opponent to strike without suffering grievous wounds in return—delivered in a whirlwind of blades that dooms anyone its wake. Brute force becomes a breathtaking display when fury warriors relentlessly dive into the fray.[3] 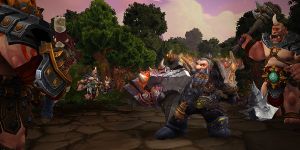 A stalwart protector who uses a shield to safeguard <himself/herself> and <his/her> allies.

Like their counterparts, protection warriors are virtually bred for physical dominance, having been raised in the art of close-quarters combat—but their measured approach to battle is what distinguishes them from their comrades-in-arms. They demonstrate an uncanny knack for blade and shield, nullifying an opponent’s advances and creating opportunities for counterattacks. For the protection warrior, being the toughest soldier on the front means nothing if allies are left vulnerable to the enemy’s attack. Stalwart defenders are integral to the success of any military campaign—the protection warrior seeks to be an unbreakable wall.[3]